What better occasion to celebrate a next to momentous birthday than to attend  the World Sacred Spirit Festival in Nagaur, Northern India under the patronage of the Maharaja of Jodhpur and Sting. Since it involved a bit of a trek from Bombay, we made a celebratory event of it with a few days in Jodhpur, a city that represents the third leg of India’s golden triangle of Jaipur, Udaipur and Jodhpur. Ruled for centuries by the Marwar clan of Rajputs from the 13th to the 20th century this land truly represents Royal India.

The massive Mehrangarh Fort dominates the landscape for miles around. This is a land of ruined fortresses and restored palaces. But Mehrangarh has a special grandeur. I had last seen it 28 years ago and time had not diminished my memories. Built in the 12th century as a protective and family home for the Marwar Kings, it also served as protector for the king’s subjects living in the blue city below. It rises and is one with the stone mountain on which it sits in solitary splendor. 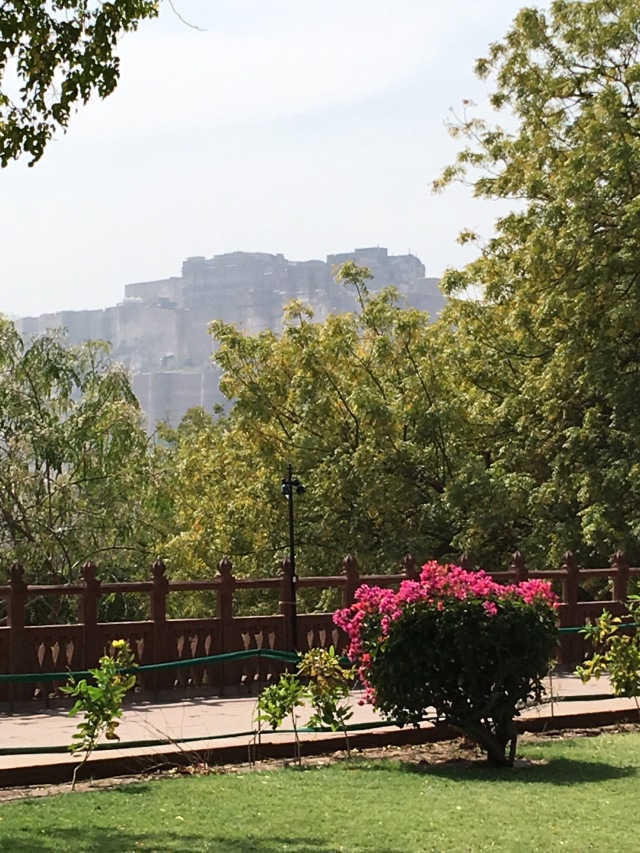 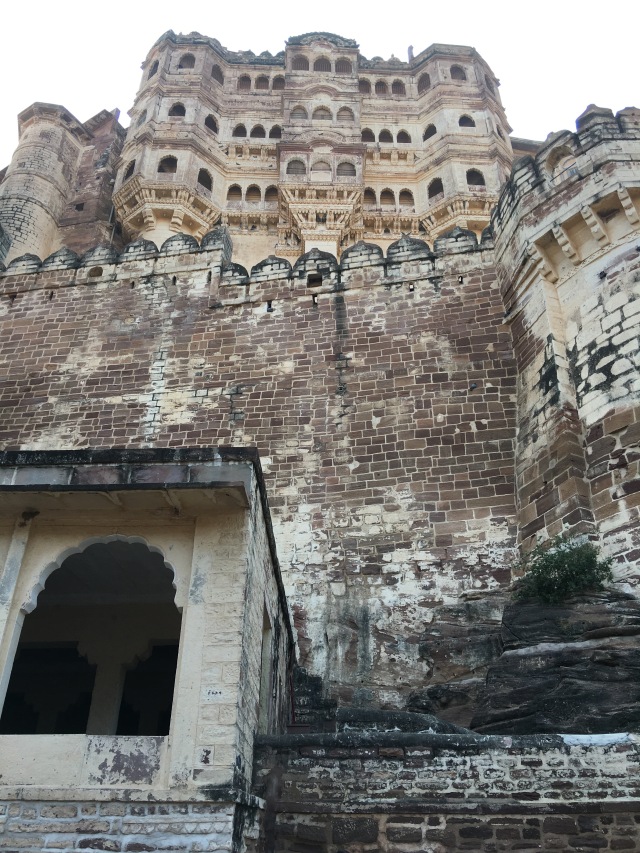 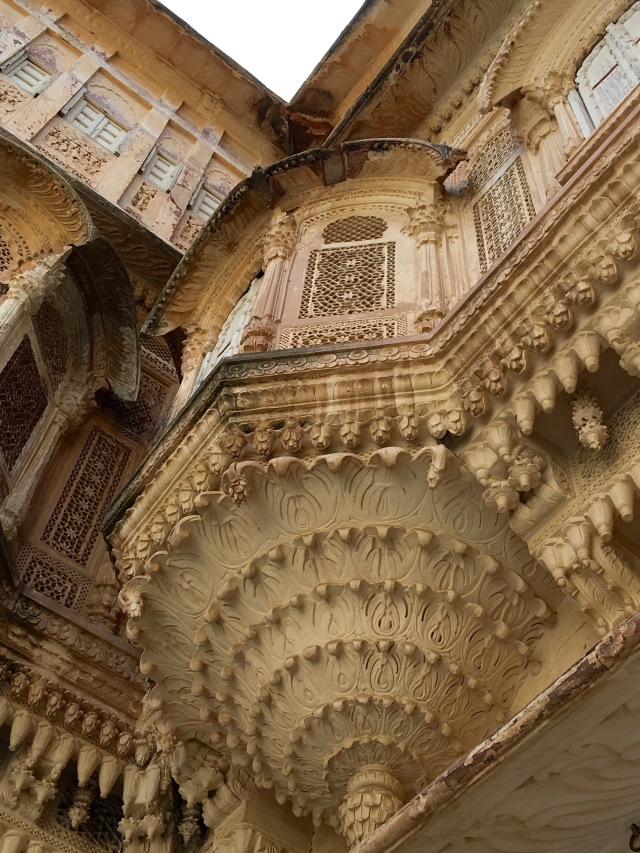 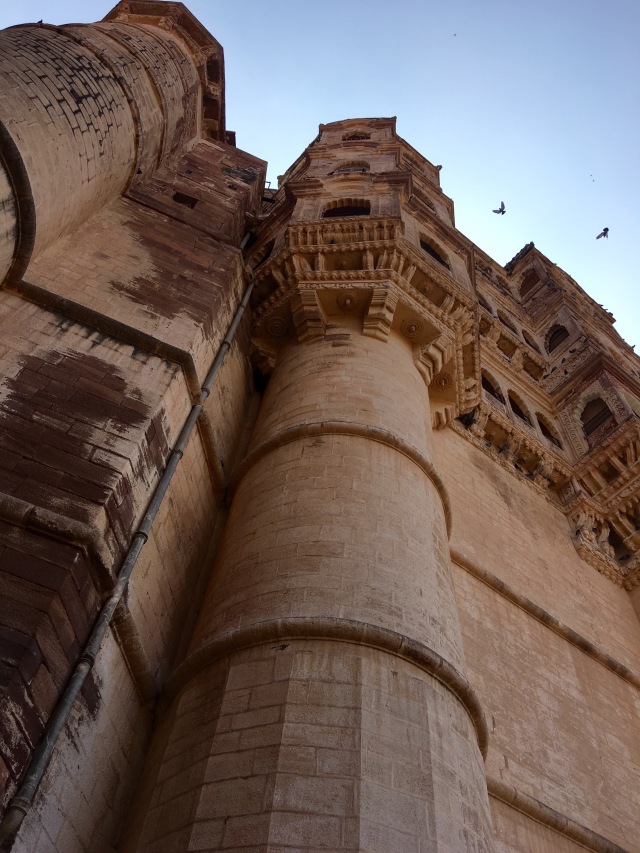 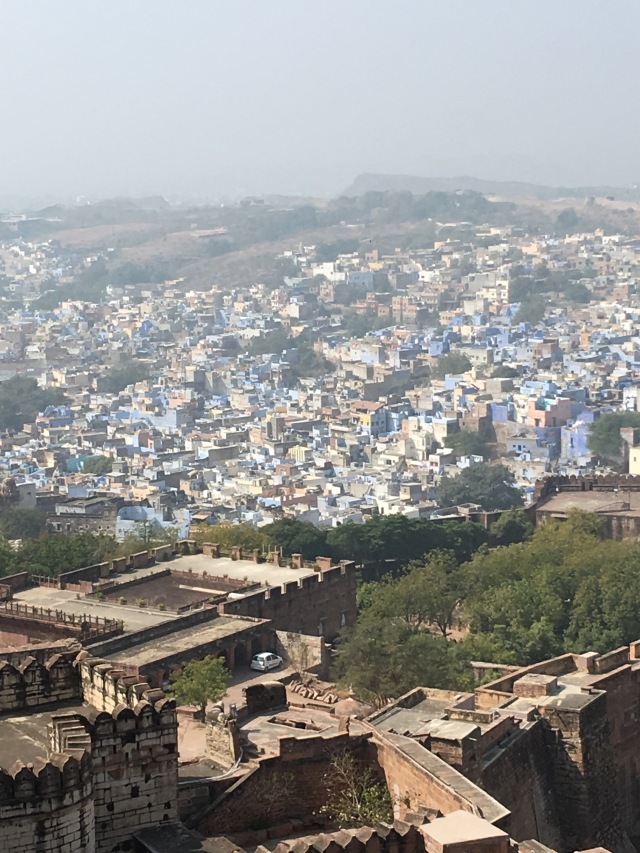 Inside lie marvels of palace rooms glittering with mirrors and ornamentation in which the Maharaja received dignitaries and his harem lived in seclusion high above the populace amongst scented bowers cooled by gentle  breezes. 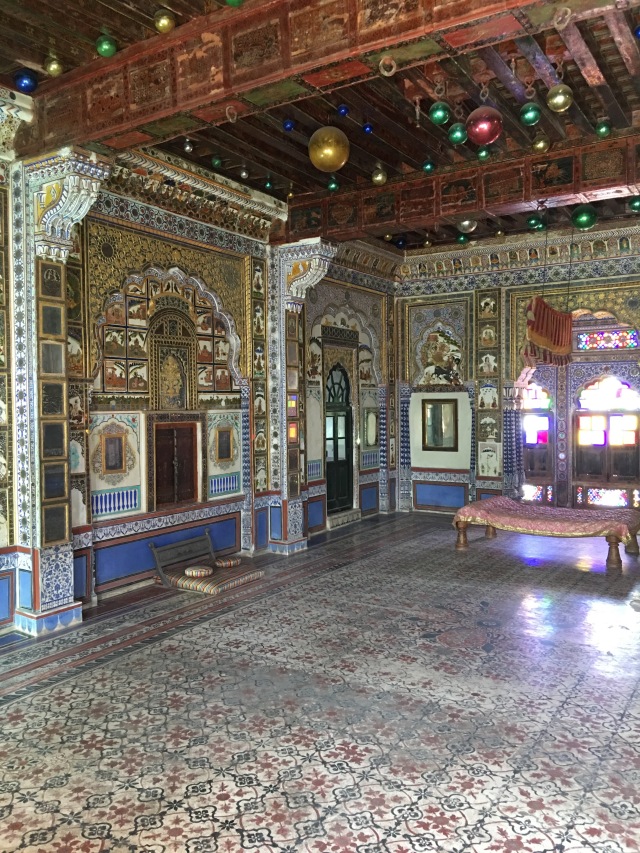 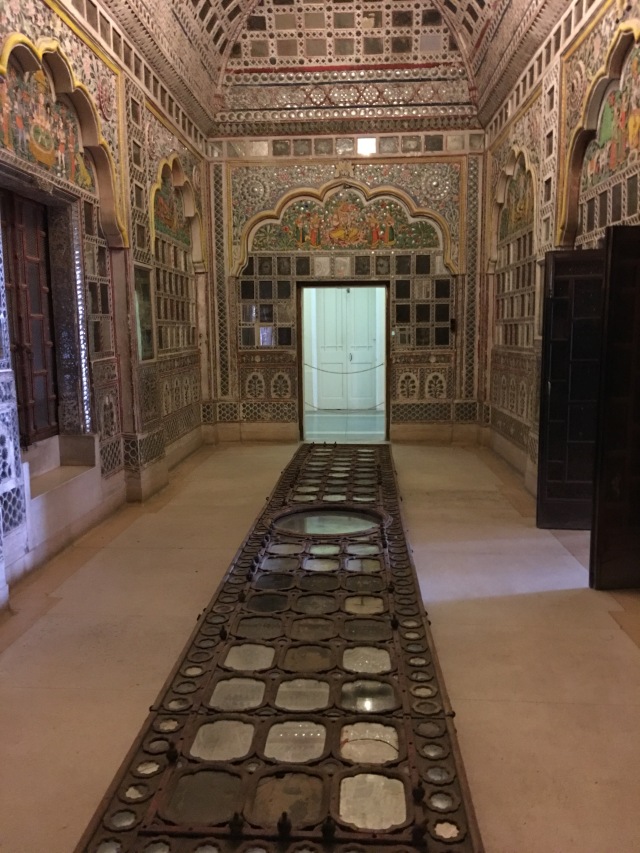 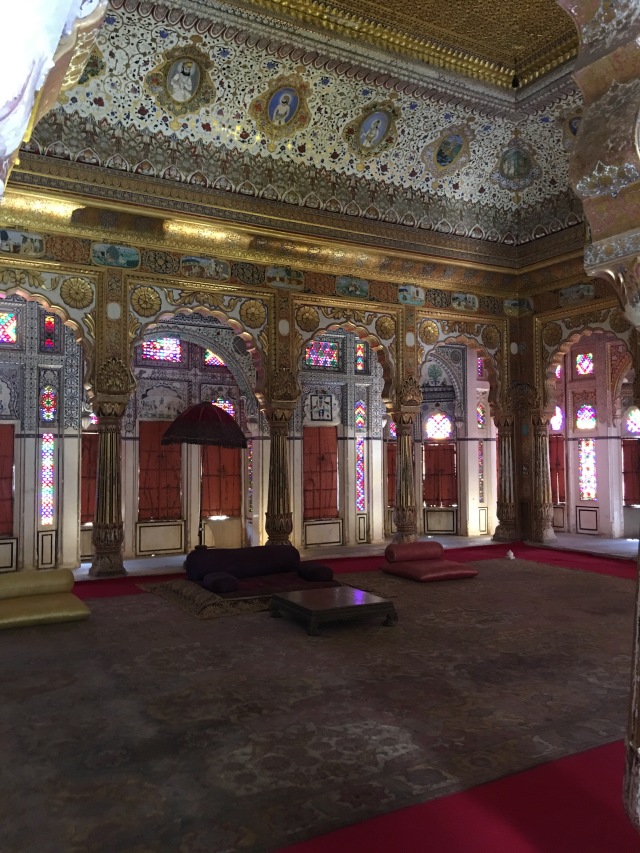 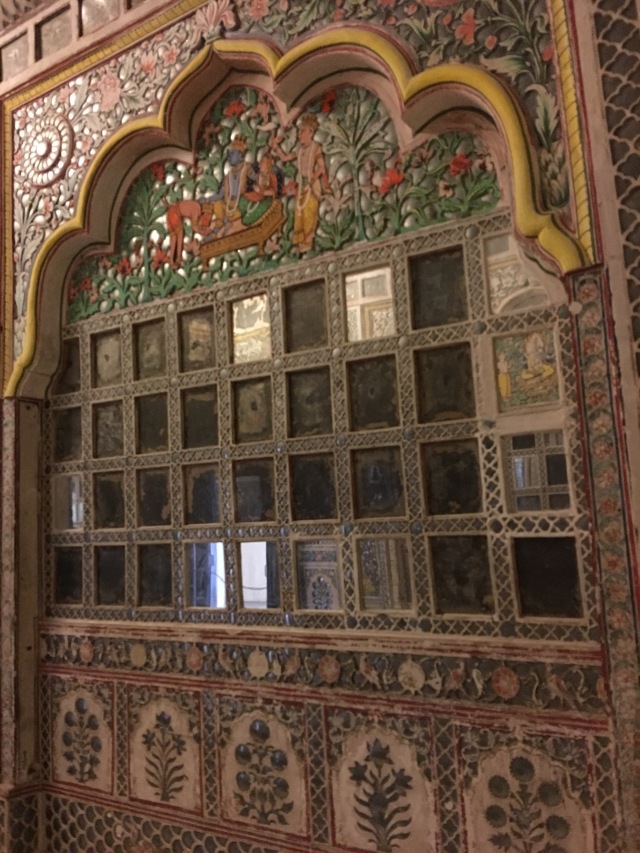 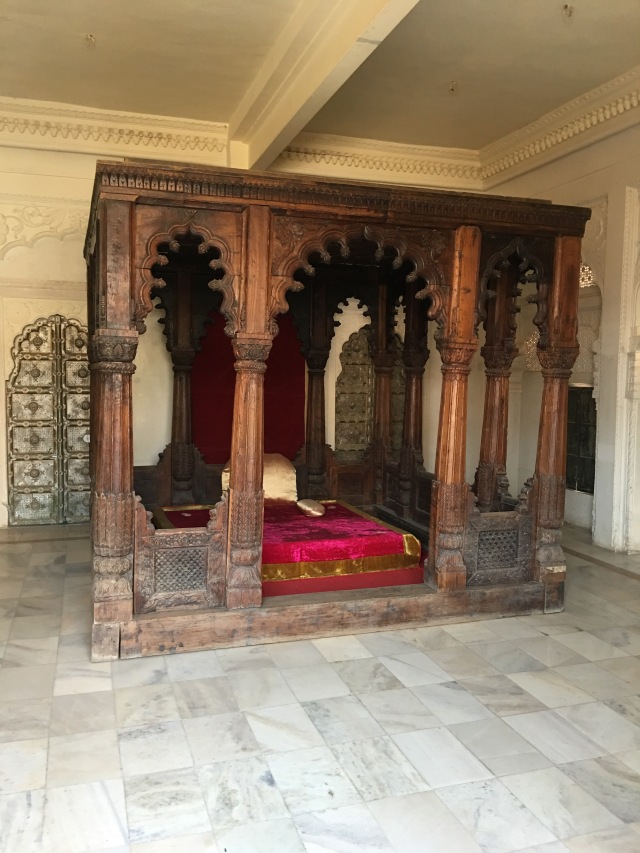 Elephants and porters were the only forms of transportation and the beautifully curated treasures include palanquins meant to be carried by both, centuries of royal cradles, ivory boxes and paintings. 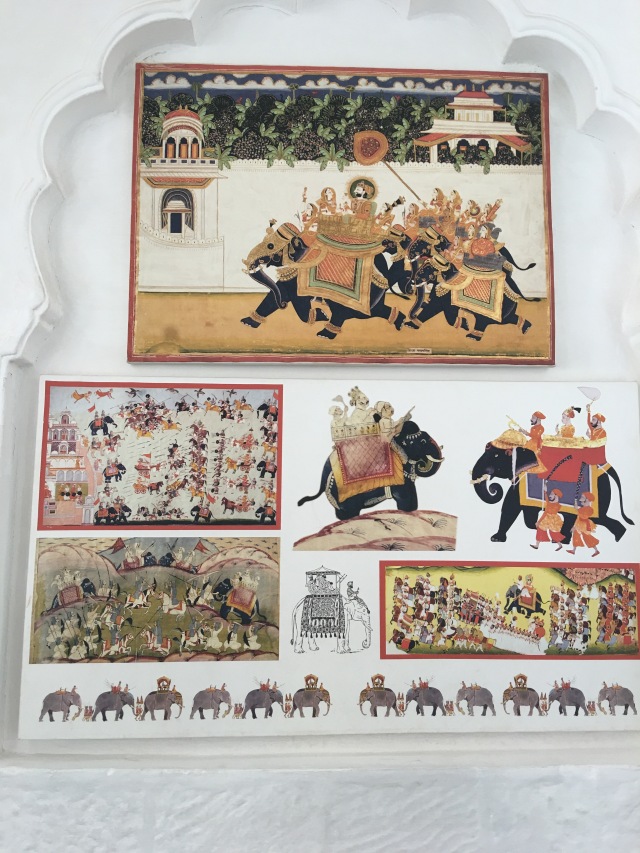 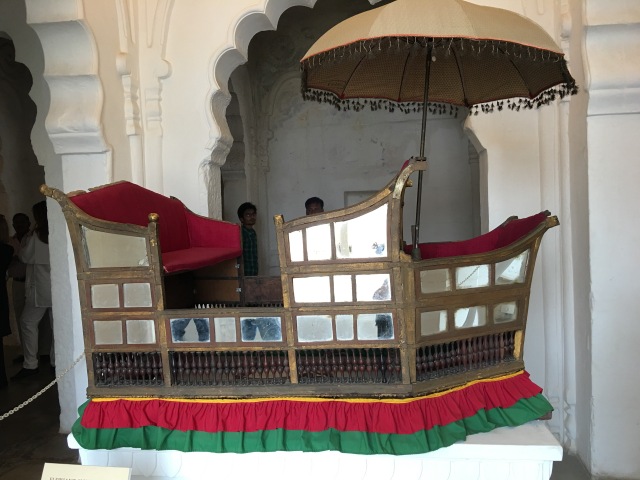 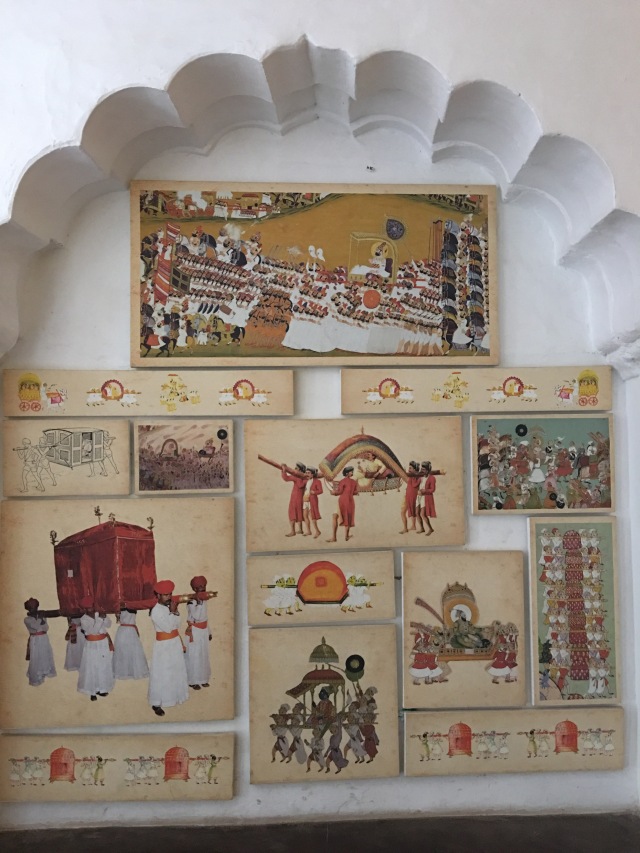 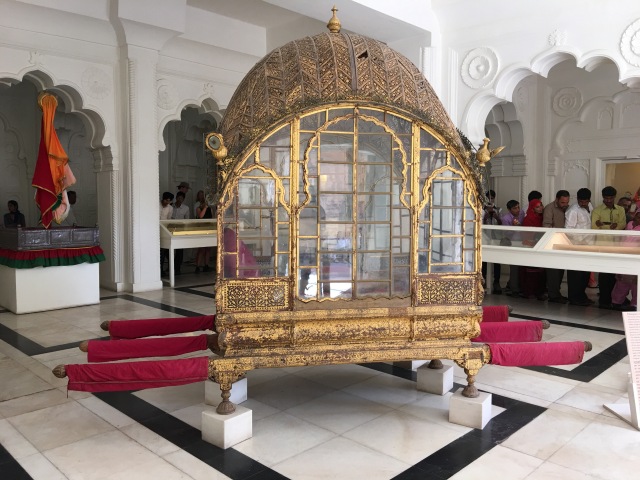 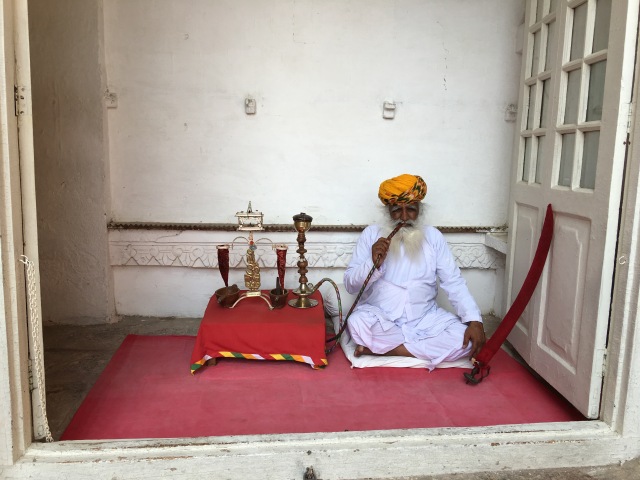 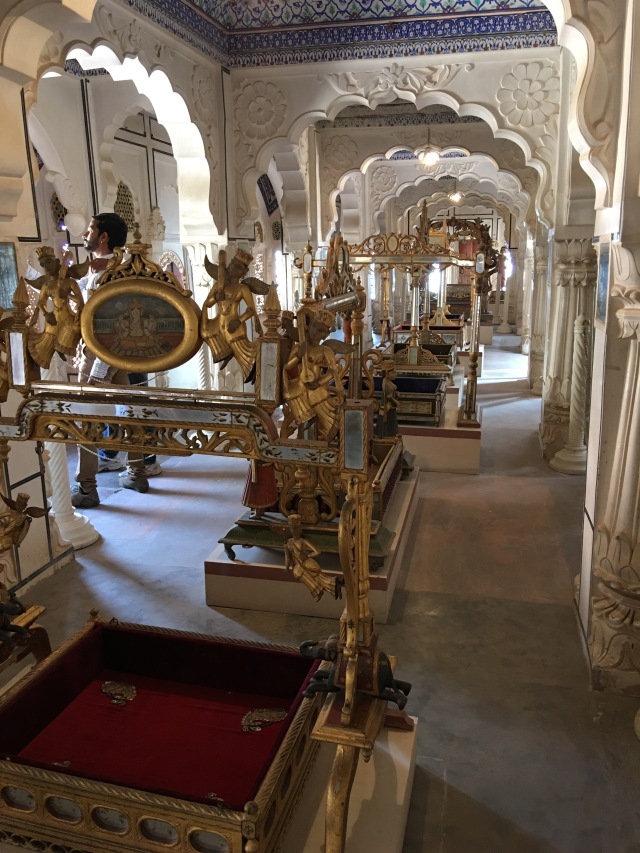 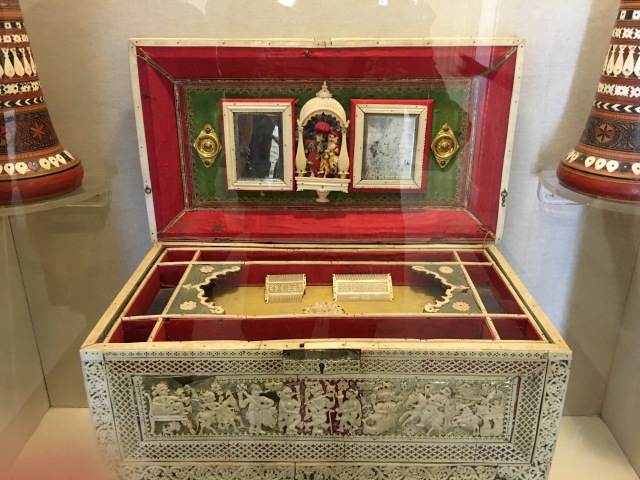 Centuries later, reminders of a grim past live on in the hand prints of Maharanis on their way to immolate themselves on the funeral pyres of the Maharajas and iron gates studded midway with nails to pierce the tough hides of invading elephants in frequent territorial wars. 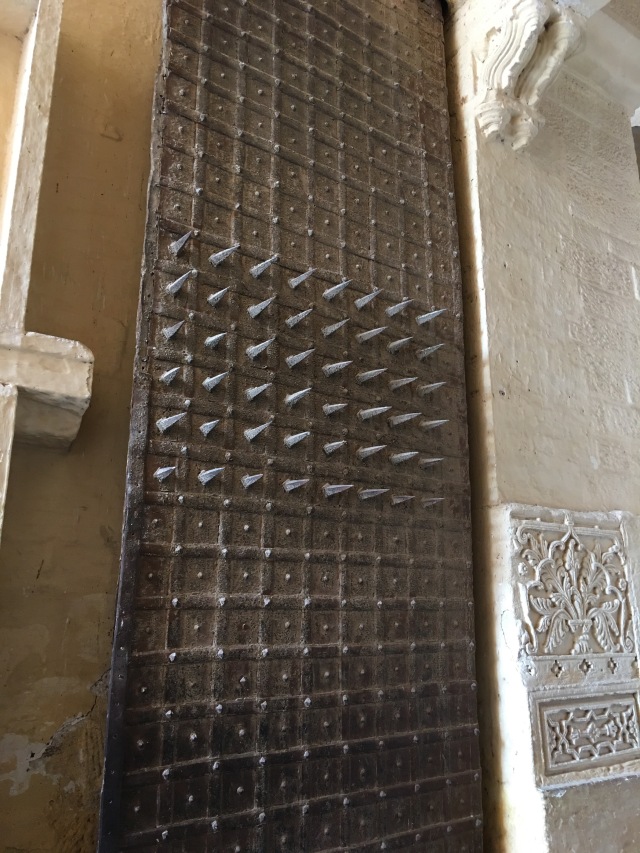 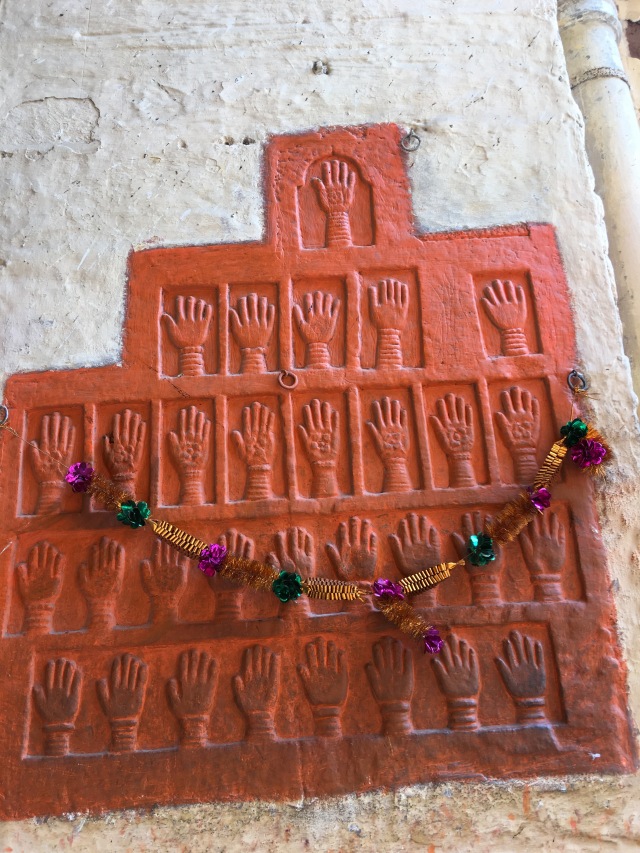 A short distance away lie the cenotaphs of the kings, Jaswant Thada. These funeral grounds were moved closer to the fort in 1895. Previous to that, the citadel of Mandore served as the cremation grounds for the Maharajas since the 12th century. 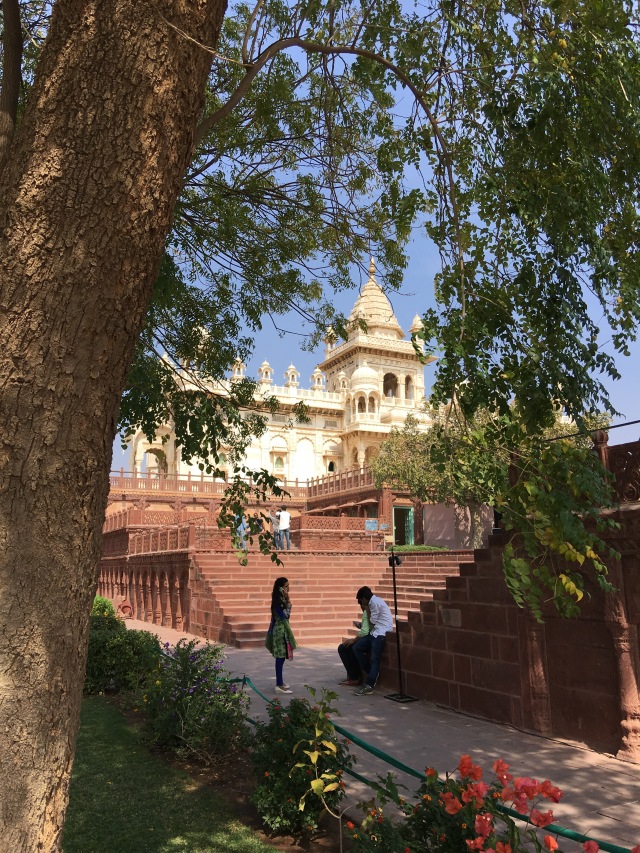 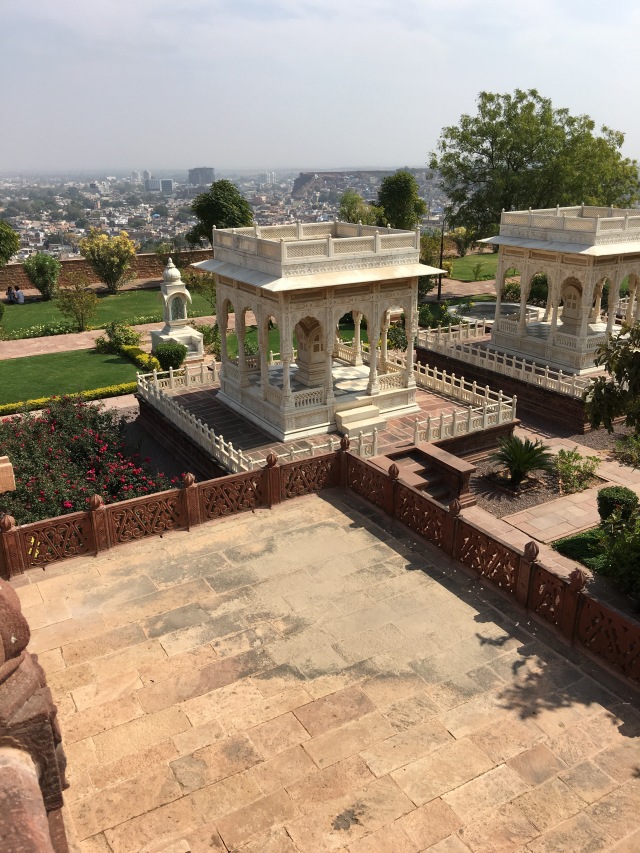 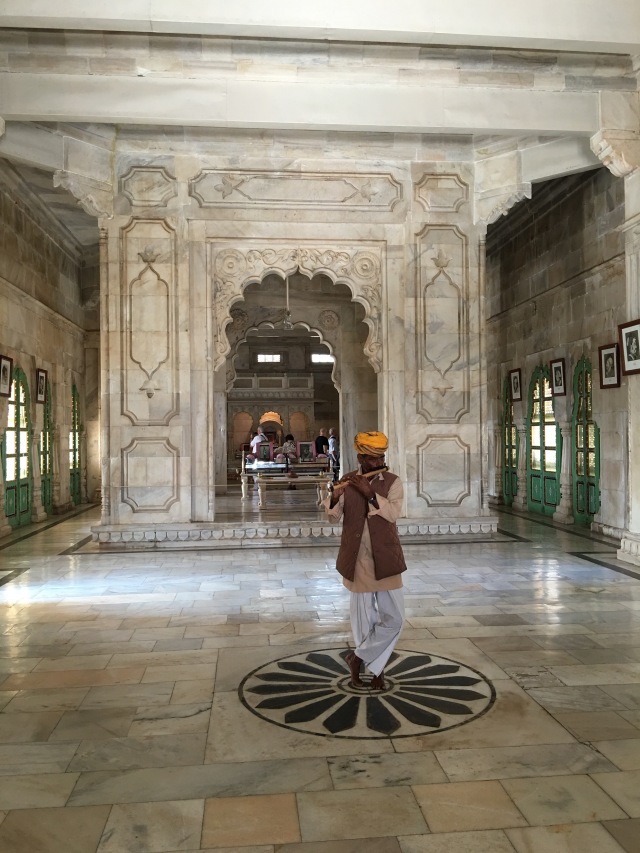 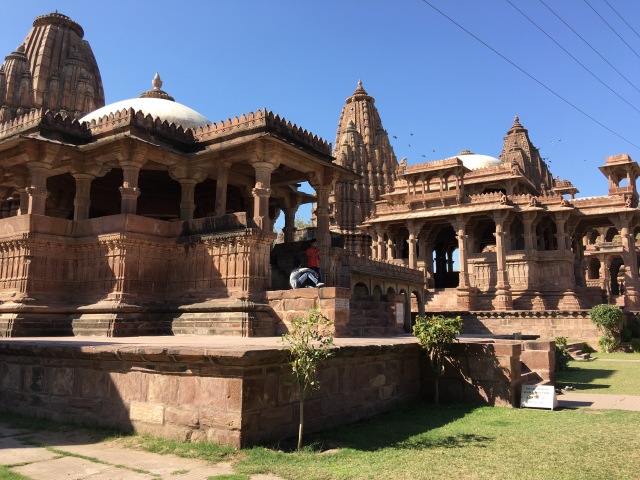 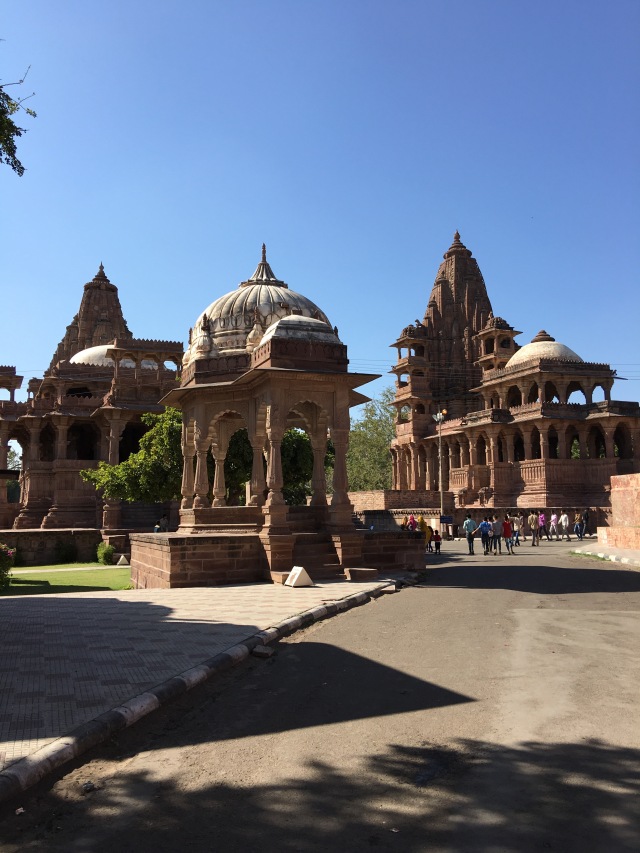 Since the 1930’s the splendiferous Umaid  Bhavan Palace has served as the primary home of the Majarajas. A division of the palace is a beautiful hotel where I celebrated my birthday. Viewing the mighty desert at sunset from the back of its ponderous denizen, the humble camel completed a perfect day. 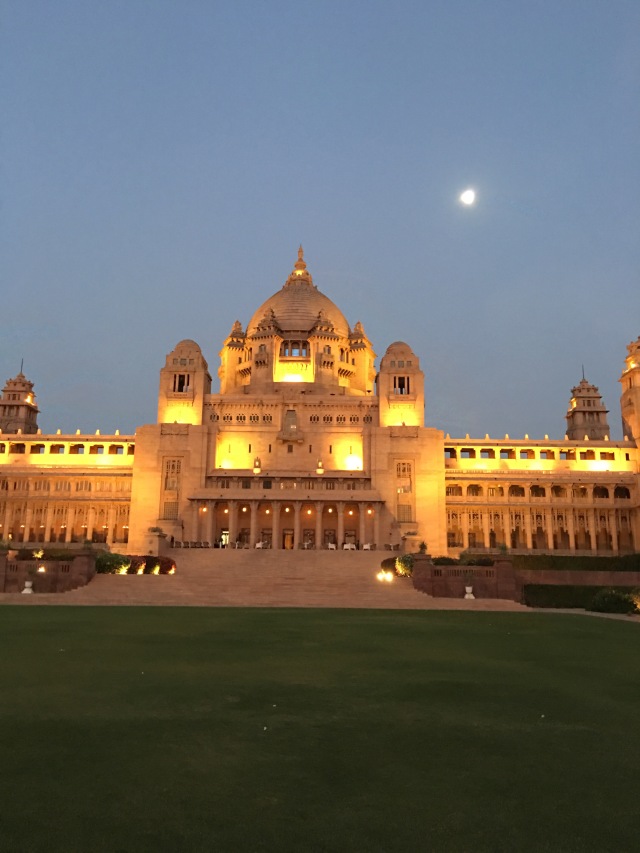 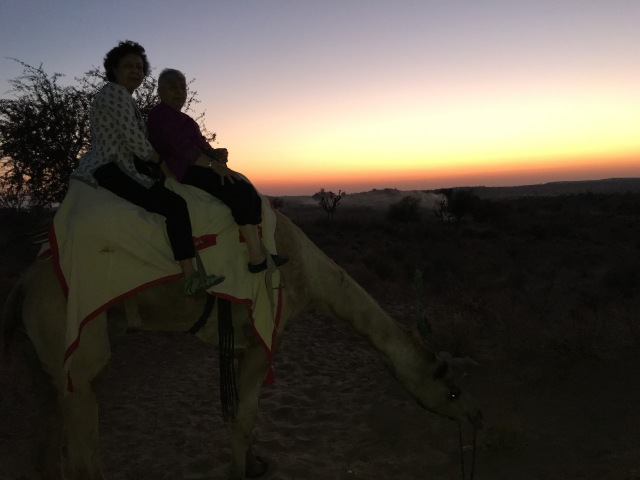 My journey into spiritual India began the next day. I close this missive with my favorite sight of Jodhpur. 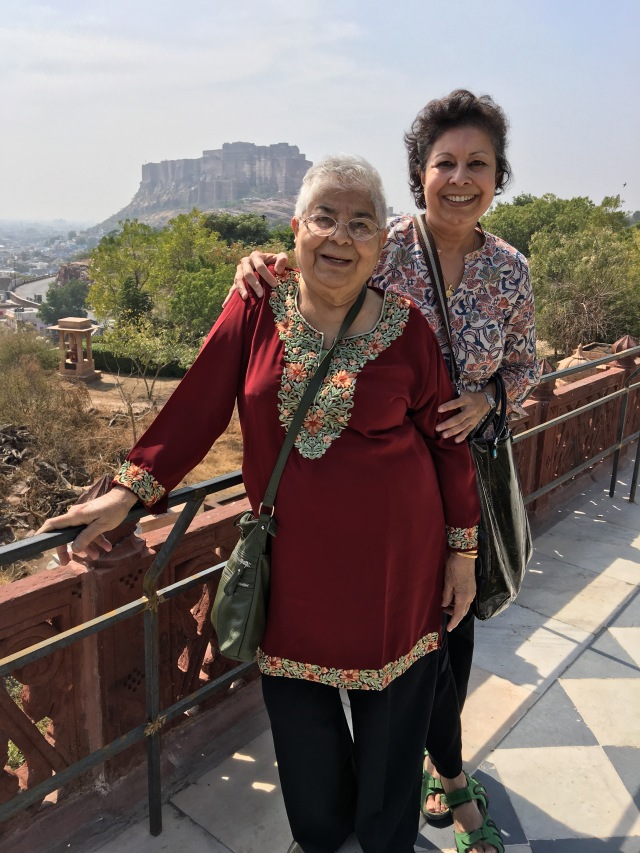 Adios till next time!