It had to happen at some point and I am glad it did at the tail end of our trip. Being totally uninspired by a country and its primary city is unusual for me as I can usually find inspiration in some event, sight or cultural nuance. Signs were encouraging as we landed at the airport in KL set amidst groves of lush Palm trees whose star shaped canopy formed an interesting design of welcome. We were a little groggy from a 3am start in Bangkok for the final leg of the first segment of the trip to south east Asia and India. The tranquil oasis of the airport welcomed our weary bodies and souls.

However that feeling evaporated as we entered the city amidst clogged traffic and sweltering heat. Positioned so close to the equator is not a lot of fun but it’s -10F in Minneapolis so it’s all a matter of perspective 😊.
We have been fortunate in our choice of abodes and this one fulfilled its promise as a haven from the heat and bustle outside. Brave souls that we are, we were determined not to waste a minute of our brief 18 hour stay before we reached the haven of our home in Bombay where restful collapse signaled a welcoming beacon.

The best way to see any large city (KL has 7MM people but millions more cars, trucks, taxis and motorbikes 😁) is the HOHO or Hop On Hop Off and we started our 23 stop journey with great enthusiasm. As long as the bus was moving the breeze kept the stifling heat at bay!! By the 3rd stop it was horrifyingly clear that the loop would not complete in the overly optimistic 1 hour promised in the promotional materials, but that our commitment to the HOHO was going to be long and eventually rainy one.  Besides the ubiquitous communication/observation tower that now dot cities from Toronto to Shanghai to Tokyo there was not much to observe but the painstaking progress of our double decker bus. A few sights of interest were the Sultan’s palace, which you could not go into but could observe from behind barred gates and the Petronus twin towers made famous in some action movie by Catherine Zeta Jones rappelling an escape to the bridge that connects the two towers and subsequently to the ground, I could not really describe the other 21 stops. Yes there were the botanical gardens with orchids and butterflies, the textile museum and Independence Square Blah!Blah! Blah! So my advice: Do not visit Kuala Lumpur unless you are forced to! 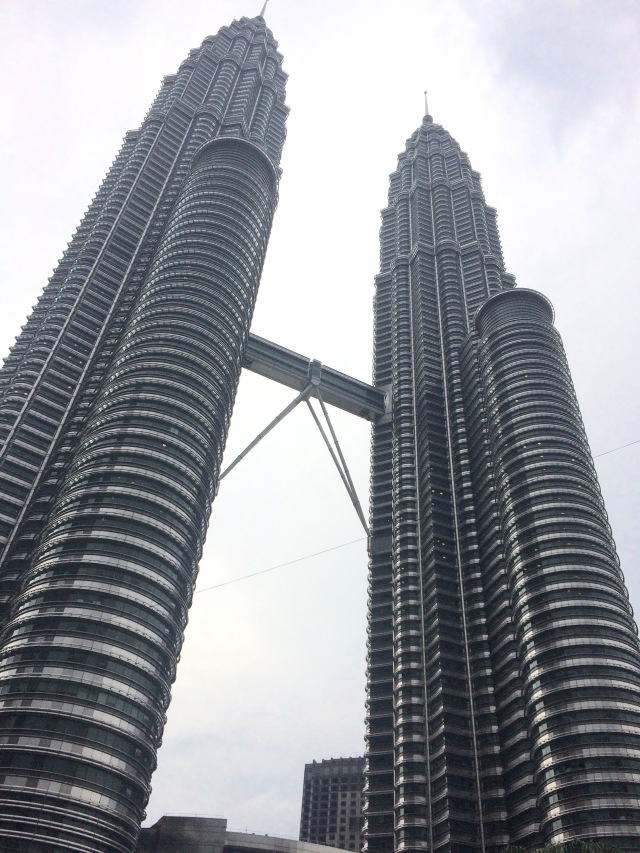 Of course the one item that fascinated me, the Kabaya, the national dress modified into a sexy uniform for Malaysia Airlines flight attendants was not available for sale!!! Oh did I tell you that we flew Malaysia airlines to KL and then to Bombay and irrational me had her heart in her mouth for the entire two trips. So I said goodbye to KL with no regret and did not bother to find its Trevi fountain to throw a coin for speedy return.

Our last night in Bangkok we visited the Patpong night market and it was fascinating to see its speedy set up on a street unassuming and ordinary by day transformed into a bustling hub of commerce and food activity from 5pm to midnight. My negotiating skills came out in full force but rather wasted against the purchase of a few magnets that I did not need. But I had to buy something! 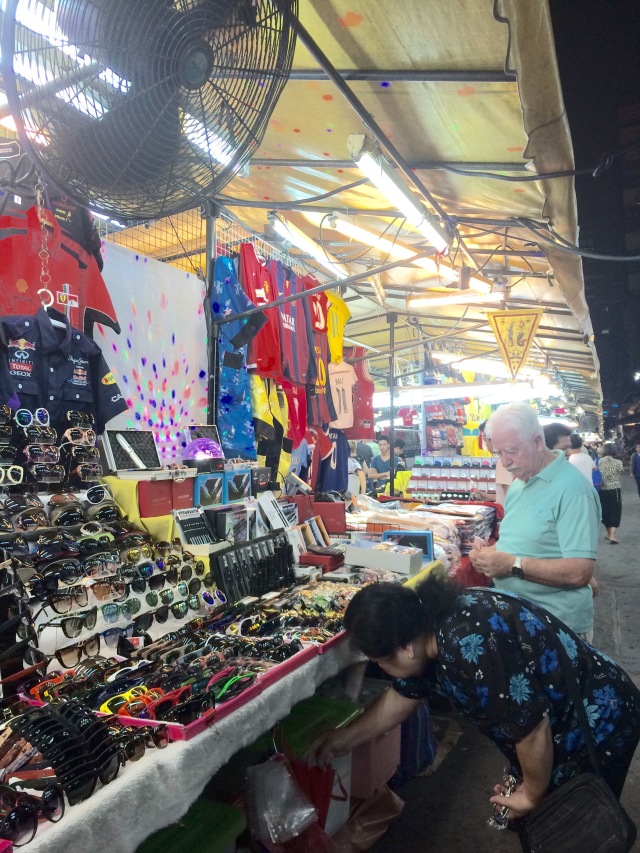 In Beloved Bombay now so Adios till next time!!!

This entry was posted in Malaysia, Thailand and tagged Bangkok, Bombay, KL. Bookmark the permalink.