It’s always been a source of amazement that in his Indian homeland Buddha never inspired the fervor and had the impact in matters affecting state and religion that he did and continues to do in south east Asia. He achieved enlightenment almost two and a half thousand years and is worshipped and loved ubiquitously in such a large part of the world.

That devotion was in compelling evidence as we walked in the hot sun of a late morning Bangkok around the Grand palace complex. It is a sparkling vision of gold, emerald, sapphire and ruby tiles, Chinese porcelain towers and gold leaf and ebony mosaics.!Fierce demons guard the entrances and the temple of the emerald Buddha strikes you stationary as he gazes benevolently from his high perch in his golden robes. The figure is carved from a single block of green jade and was discovered in 1434 in northern Thailand. Unfortunately no pictures are allowed so here is a grainy one from the brochure.

The Grand Palace complex was established in 1782 and it consists of the royal residence, throne, coronation and funerary halls and sprawls over a vast area. There are upper and lower terraces, the history of the Ramayana the Hindu sacred epic detailed in over 170 plus mosaics. 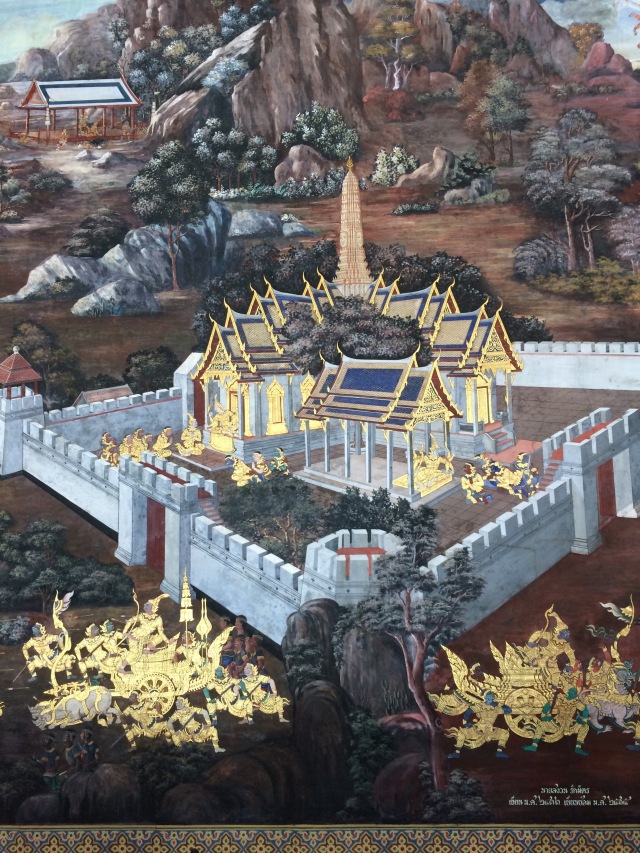 The layout of he Grand Palace below provides perspective of its size in the heart of this big traffic clogged city. A past haven for the royal family though they don’t really live here anymore. 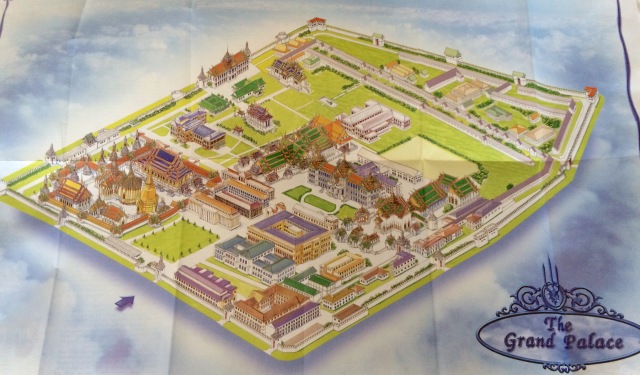 I hope I do justice to the complex and its stunning array of colors with the following pictures. 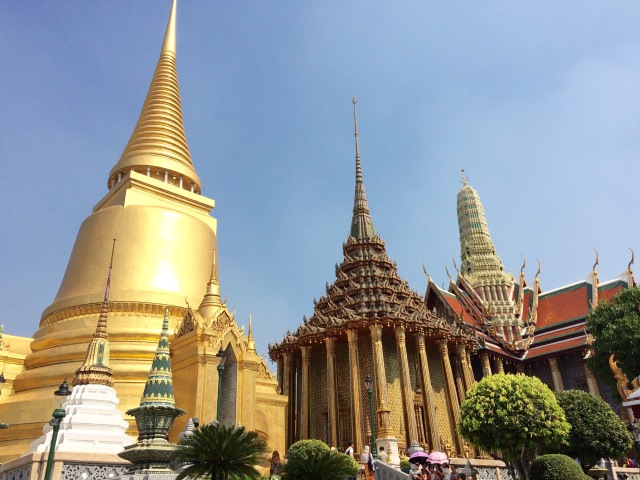 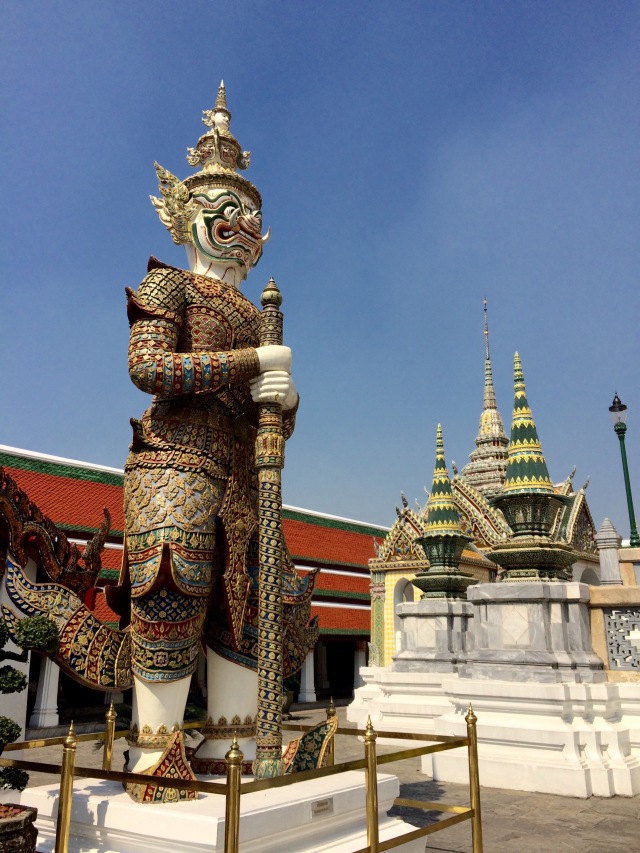 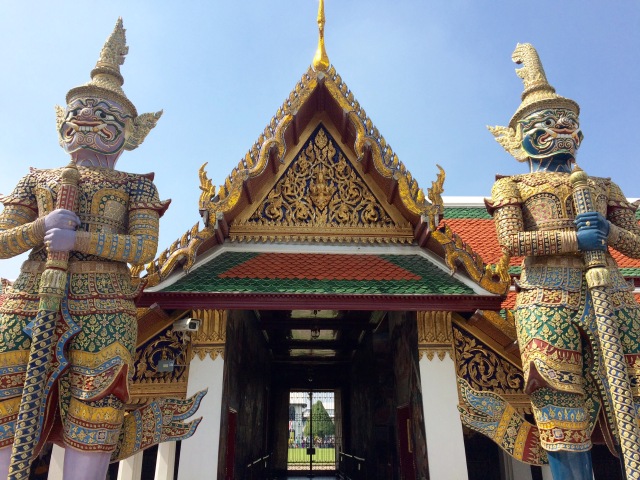 The Reclining Buddha or Wat Pho is very impressive. It is representative of Buddha at the moment he achieved enlightenment and is very serene though the hordes of people trying to get their photo with the statue (mea culpa 😉) did ruin a little bit of the ambience. 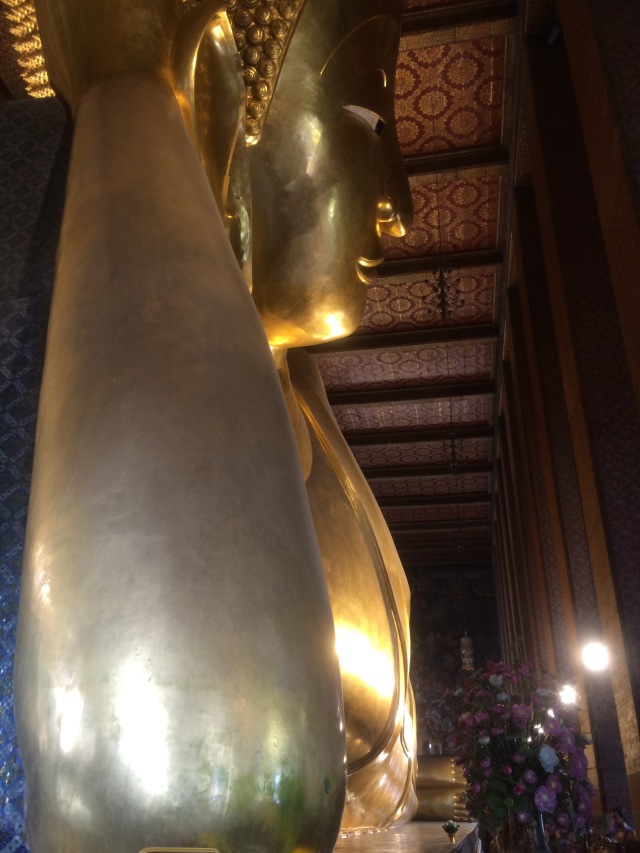 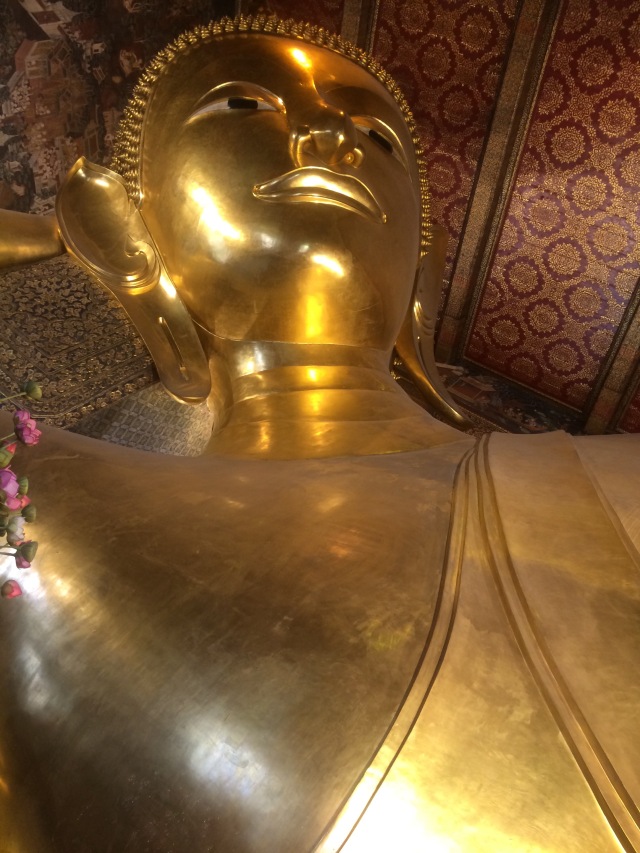 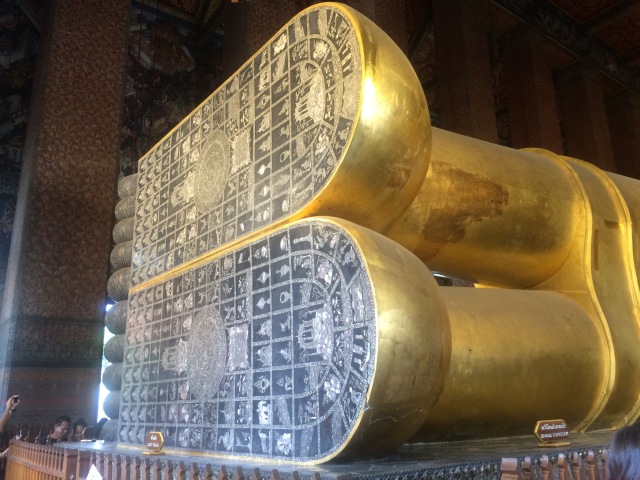 Back to commercialism, the Floating and Train markets had their own charms. The floating market is a series of canals that one traverses as one shops, eats and watch silent monks provide benediction and collect alms. 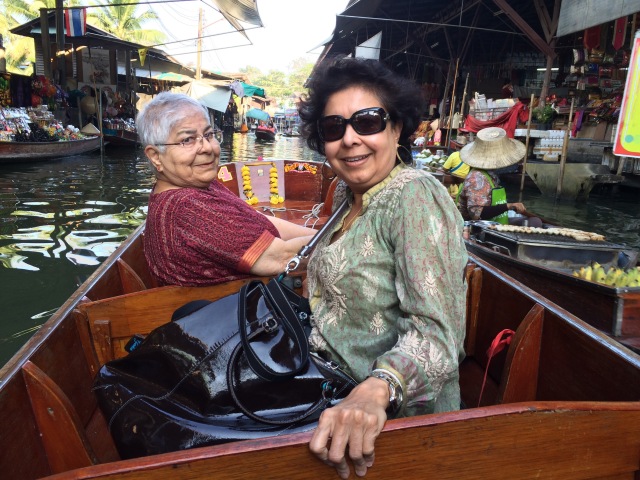 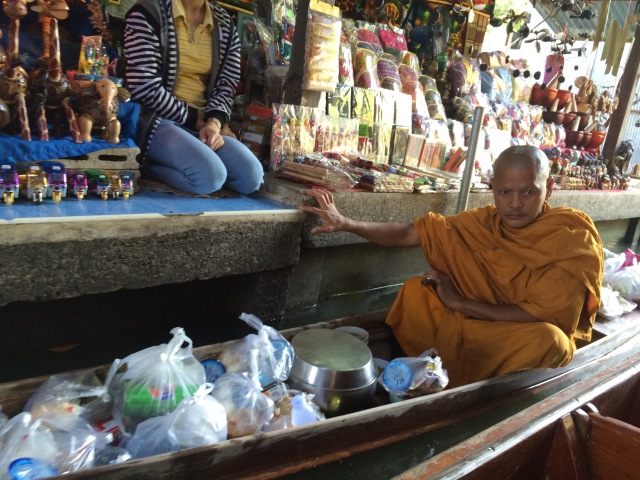 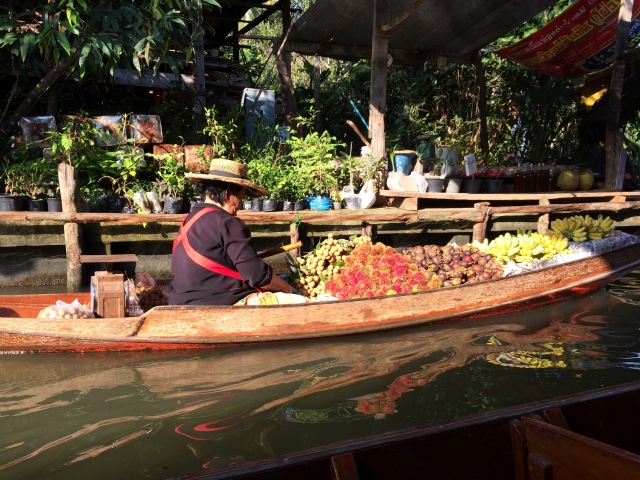 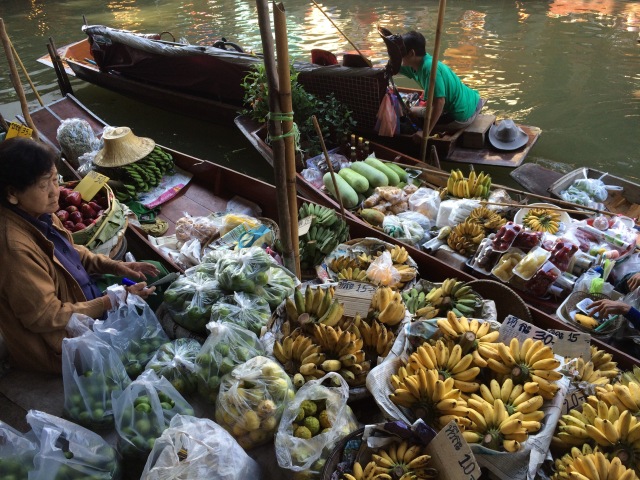 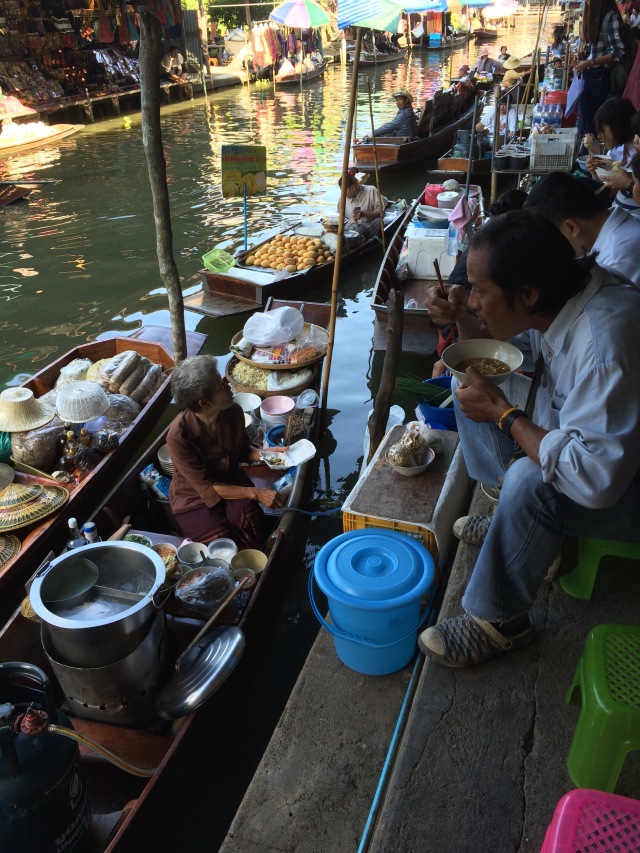 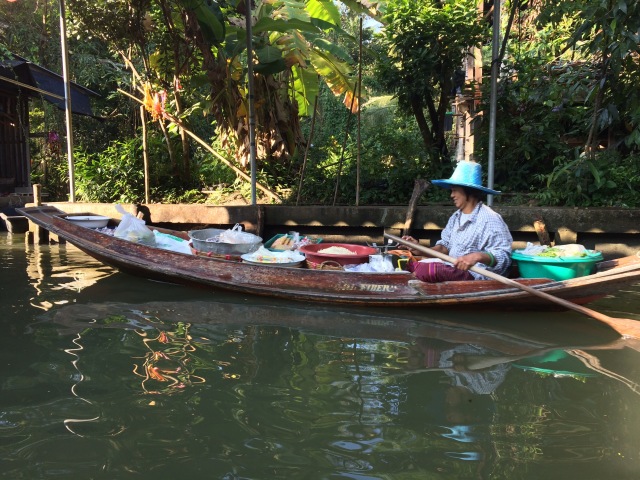 And I end with the Train Market. What an amazing experience. The train market is conducted on the train tracks and 6 times a day in a well coordinated move between the market and railway authorities the tracks are cleared 5 minutes before the train arrives and resumes as soon as the train passes through. All it takes is a hoot of the whistle to signal the incoming train! 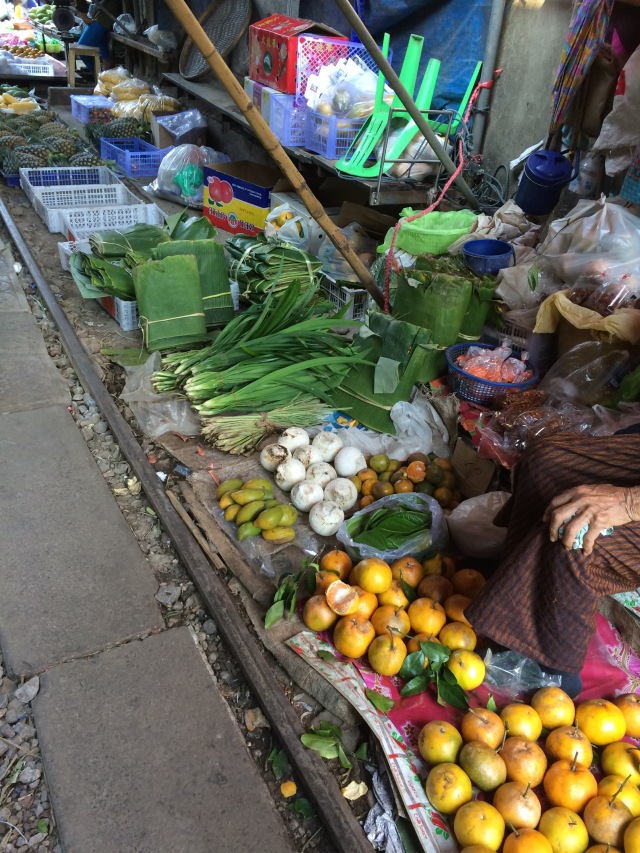 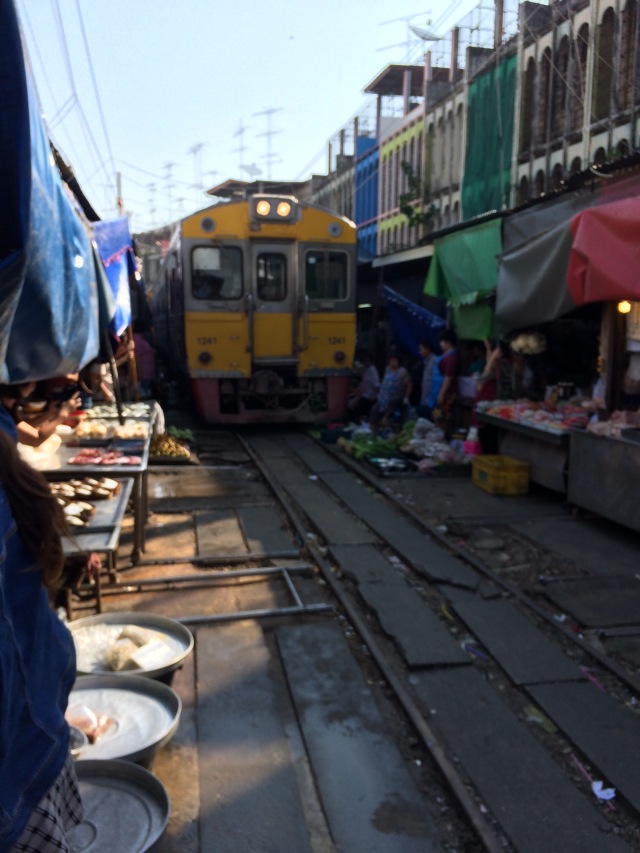 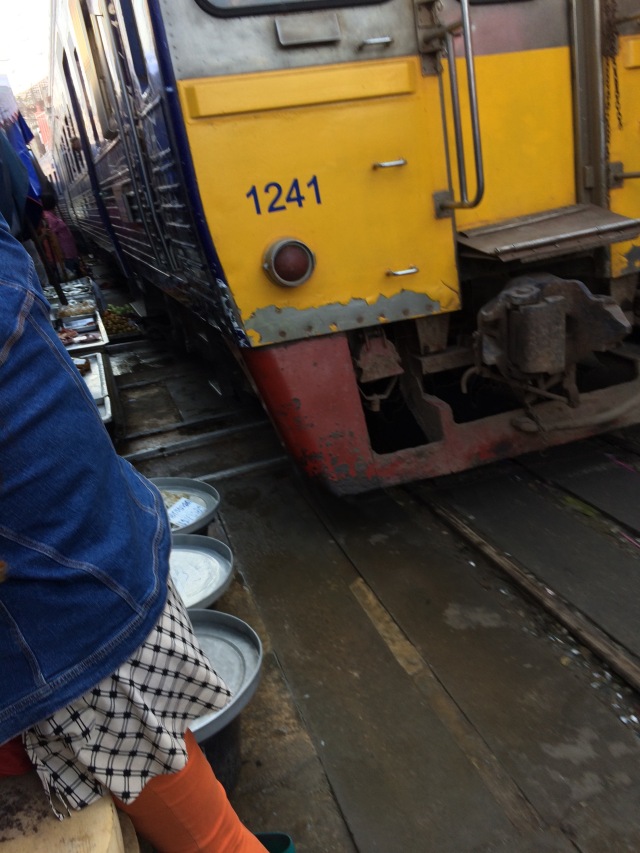 Train departing and resumption of market. 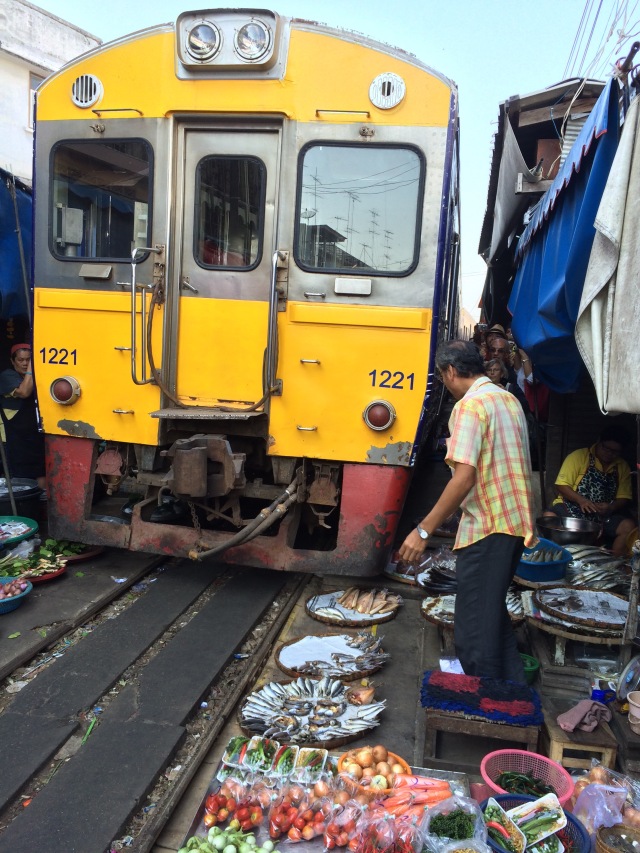 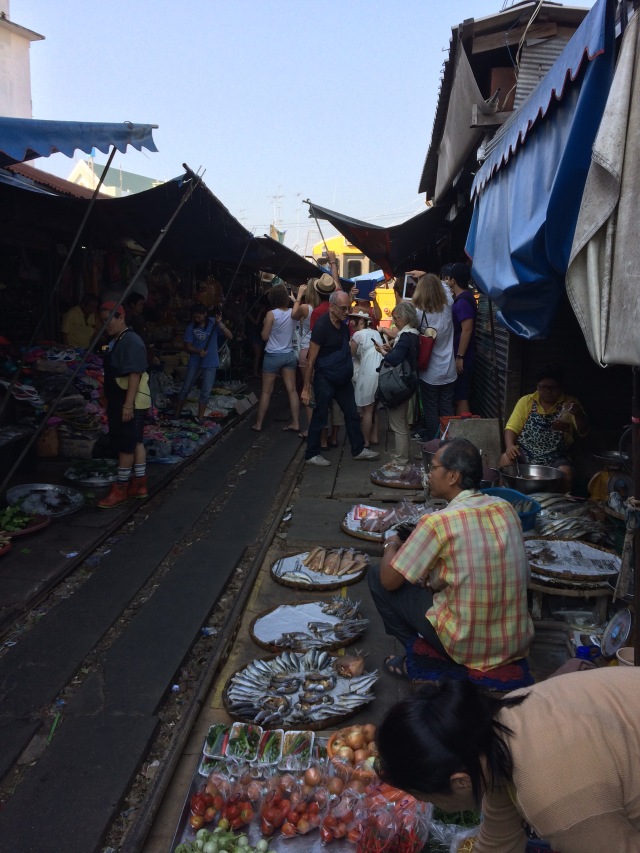 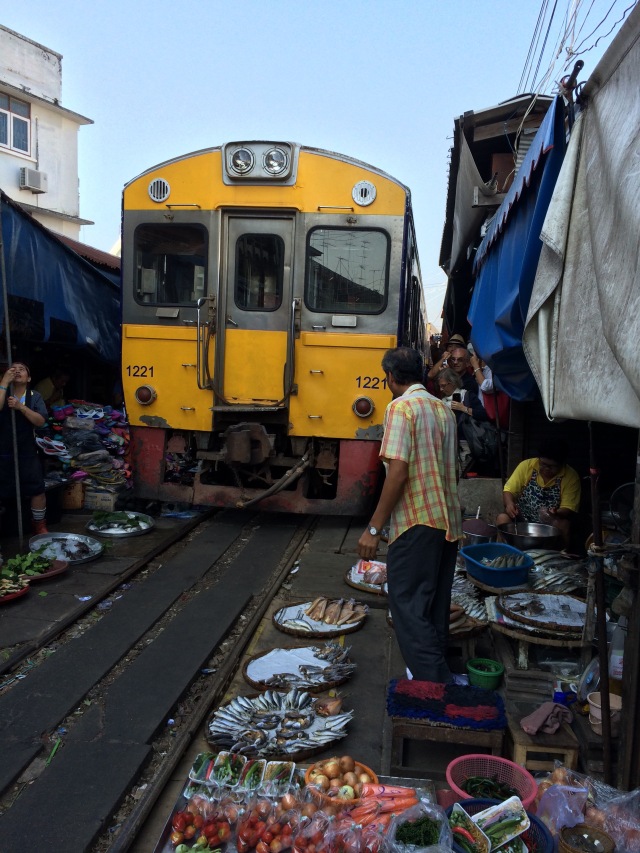 Adios till next time!!!

This entry was posted in Thailand. Bookmark the permalink.

3 Responses to Emerald and Reclining Buddhas!