We left Vietnam after 10 glorious days and arrived in the city of my dreams late morning. Vietnam was wonderful, it’s people warm, welcoming and friendly. And not a bit of resentment or animosity towards Americans. Quite the opposite in fact. So it was with some sadness that we boarded Cambodia Angkor airlines and waved goodbye to the sights, beauty, culinary delights and the sweet hosts of our Vietnam interlude.

I have wanted to visit Angkor for so long that it had assumed mythical proportions in my dreams. And it did not disappoint. From my first sight of the Central tower of Angkor Wat as we drove from the airport to the scented embrace of our hotel, the Sofitel Royal Angkor, to the explorations of the last day and a half, I have been transported gladly to a 1000 years ago!

Angkor is a lasting monument to the glory of a bygone Khmer civilization and its famous king ‘Jayaverman’. Built between the 9th and 13th centuries to glorify a succession of Khmer kings, the temples are massive and majestic, with huge moats the size of lakes, imposing gateways and towers and colossal sculptured Buddha images many self imposed with the face of the king. And it’s all in the midst of heavy jungle. It encroaches every year and has to be beaten back before it can consume Angkor and hide it again. I wonder if that may not be a bad thing, after seeing all the proliferate littering and careless management of the place. Unesco is trying its best but the government also has to play its part.

We visited Angkor Thom the first day and the massive Bayon temple that morphed from Hinduism to Buddhism on the whims of its masters. The gates, giant Bodhisattva heads and bas reliefs were magnificent. Some are in remarkable condition and others have been painstakingly restored like a giant jigsaw puzzle. 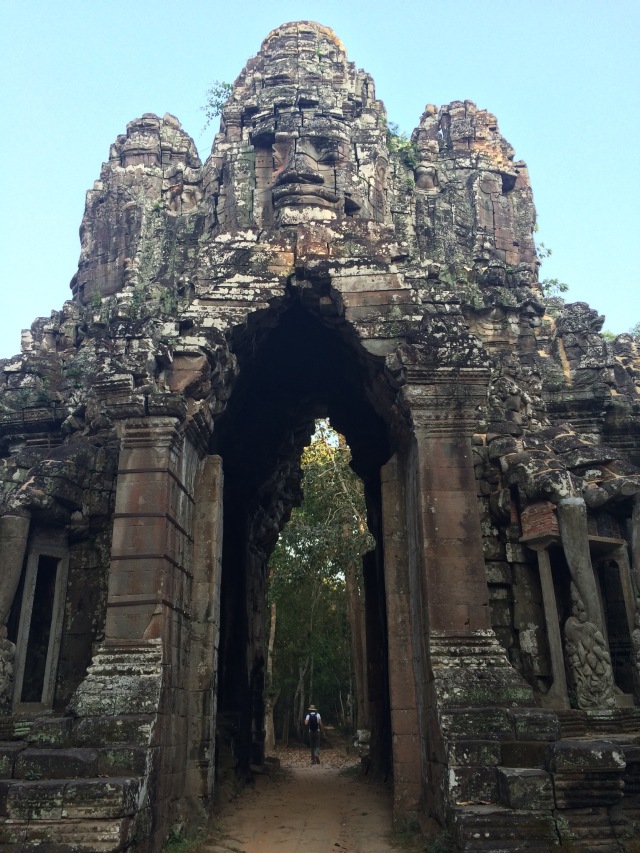 The temples are famous for its carvings of its Apsara dancers, a delicate form of dance that came from southern india and characterized by tiny hand, head and feet movement. A performance of that polished off a glorious introduction to Angkor.

And then the main temple complex of Angkor Wat. Words can never adequately describe what I saw and how I felt. You have to visit for yourself. It’s an architectural masterpiece built in the 12th century and covers over 500 acres. It’s many columns, pavilions, courtyards, intricate bas reliefs depicting Hindu epics such as churning the sea of milk with the efforts of demons and good spirits and the help of a giant snakes tail are almost overwhelming. And after ascending into the clouds via impossible vertical stone steps the priests worshipped beautiful statues of Buddha.

The following picture shows what human hands stroking the bas reliefs has done to the natural red color that still lingers on some of the monuments.

Another day of the vast Angkor area awaits us so adios till next time!!

This entry was posted in Cambodia. Bookmark the permalink.